The Orient watch company recently launched three of its Orient Star models in the international market. They are the GMT, Retrograde and Open Heart model. I was smitten by the GMT model when I saw it being advertised in a megazine. I quickly decided to get one. The model that I got is the GMT model, DJ00001B. 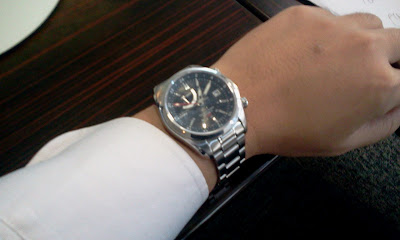 Here is a picture of the watch on my wrist. Unfortunately, my photo skills are poor, so interspaced with my photos, I've added some photos from the net to provide a more detail image of the watch.

Above is a close up shot of the dial (picture taken from the web). It comes with applied hour markers and has a power reserve indicator at the 11 o’clock position and a date window at the 3 o’clock position. The long GMT hand is red in colour. It can be set independently from the hour hand. Besides the 24 hour markings on the dial, the watch also comes with an inner 24 hour rotating ring for keeping track of time in another timezone. 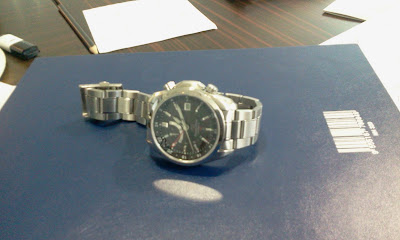 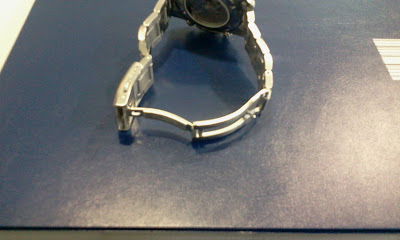 The watch is equipped with an oyster style bracelet with push button lock and solid end links.

Below is the see through back showing the 40P50 GMT movement. 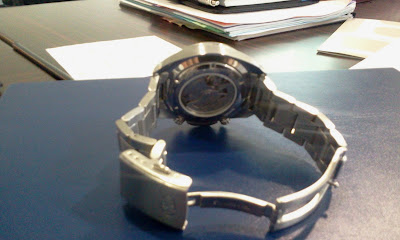 The Orient Star GMT model's hands are lumed. It comes with sapphire crystal for the front and a hardlex glass for the display back. It is water resistant to 100 meters.
The Review 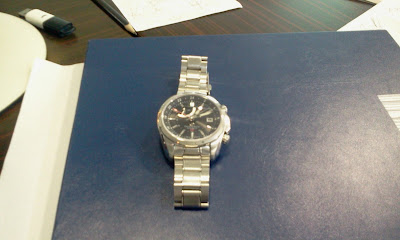 I got the watch last week. The first impression is its weight. The looks does tranlate to a heavy watch. Although titanium could be an option, I serious doubt that Orient will go for that option as it could go against expectations from buyers. I bought it because of its "man-ly-ness". The weight should reflect that.
The power reserve indicator is very accurate. I left it for 20 hours and it indicated that the number of hours that has gone by since the watch was last moved was exactly 20 hours.
The two crown system of this watch is very interesting. As highlighted earlier, only the bottom crown is screwed on. For the life of me I don't quite understand the design of this. Why only one of the crown is a screw on? Why not both? Why have a screw on in the first place? Do anyone of you know the answer?
I like its bracelet. It is solid and has the Rolex-like-link.
In terms of quality, I used my Seiko Ananta as test reference. For this test, the Orient Star GMT's build quality is not as impressive. 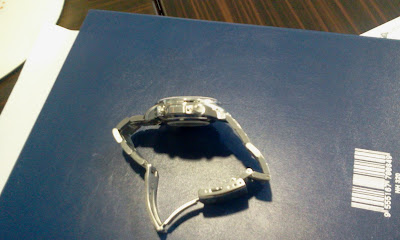 Suggested retail price in Malaysia: RM2,500. I got it for RM1,875.
Below is the brochure on the new models by Orient Star.